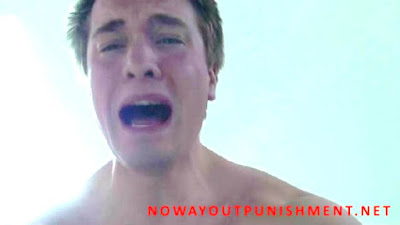 How difficult is it to spank a straight rugby player to tears?  Rugby players are known for their ability to endure knocks on the field and Jeff arrived with the attitude that he would be able to take what we dish out here are No Way Out.  I like a challenge and I was very happy to show him what real male-male punishment could feel like, both physically and mentally.  Even though it was his first film and he had never been spanked or belted before, I decided to go for some good firm restraint to keep him where I wanted him, because I was going to test his limits.  For a first session, this was going to be nice and challenging.  He held things together well to start with, keeping his dignity, but not long into the session, he started to realize he was in trouble.  Big trouble.  The onslaught of my hand, paddle and belt brings him close to tears as he screams, yelps and shouts for you as I turn his pale ass various shades of bright red and crimson.

A sharply-dressed, suited top strips a restrained, muscular sub before belting him long and hard. No warm up, no switching of implements, the guy is just bent over a bench and belted again and again and again.  Each time the belt lands on his bare ass, it jolts and bounces, taking on deeper and deeper shades of red.  The top is determined to get good value for money and he just keeps going until the sub is dragged onto the floor, a foot on his back to keep him in position.  Maybe he thinks it is all over, but it is far from it.  His sore and red cheeks are perfectly positioned for further and more humiliating thrashing at the feet of his master.  Well and truly thrashed, belting throughout from start to finish.

There are some guys out there, the ones wandering around in suits, the ones that have respectable jobs, that secretly would like nothing more than to take a guy and whip his bare ass until he shakes with anger, fear and pain.  This suited banker is celebrating his bonus by having a muscular, hard guy taken from the street and strung up.  He starts with a butt-whipping with a nasty bullwhip over underwear and if that was not humiliating enough, the guy rip-strips his victim and takes a huge amount of pleasure introducing his bare ass to the delights of the bullwhip.  Matt is a strong, proud type, and that makes it even more fun to see him reduced to shuddering and screaming as he unsuccessfully avoids the lash.

Before I punish a guy for the first time, it is always difficult to know how he will react.  It makes the job more interesting because reactions to spankings are very varied and often unpredictable.  I have had tough guys reduced to tears and I have also had guys that appear very unassuming that can really take a belt.  But regardless, they will take what is coming and regardless, it will push their ability.  Enter Tom, quite a confident guy – a ladies man – who bends and takes punishment from another guy.  He has been in trouble with the police on numerous occasions and so I think what makes this video interesting is that the punishment is deserved, he accepts what it going to happen to him, and he probably hates taking a belt more than most things.  In that sense, it is real punishment.