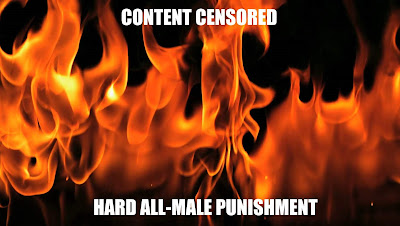 Hard From the Very First Stroke

I've had quite a few emails this week about the Dungeon Series.  The dungeon series is probably one of our most popular series of videos ever and it's for this reason that it's almost always in the top sellers list.  I think that there is a tendency to see a series such as this (the dungeon series is 5 videos) to assume that the action really only heats up towards videos 4 and 5.  I'd like to assure you that right from the get-go, the action is incredibly hard and exciting.  In many ways, the first video, the first opening strokes with the belt and a huge wooden paddle are probably some of the most challenging moments.

Str8 Guy Kicks Up a Fuss

I still get a lot of guys approaching me either to do a paid shoot or because they want to explore their need to take hard CP.  Either way, a great attitude and a willingness to do whatever it takes to get the footage in the can is what I am looking for.  In the case of James, he really makes me proud because he's not an experienced CP-taker (nor does he really want to be).  He makes a hell of a noise so if you like guys screaming as their bare buttocks are punished then you'll love James.  He's a lot of fun to watch.