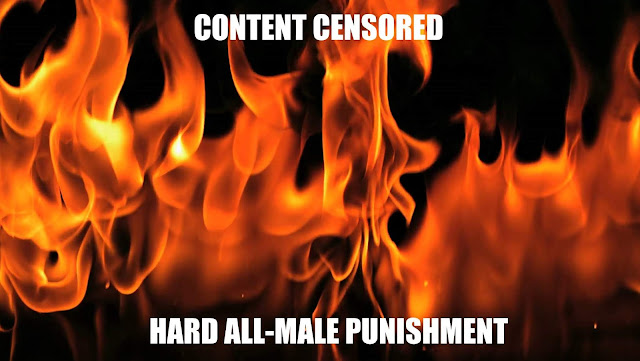 It's not easy to do.  Imagine putting yourself in the position of one of my str8 guys that has never taken a belt.  You are expected to come round, strip off in front of the camera, bend over and take a series punishments across your bare ass?  It's hard to imagine how you would keep your dignity, especially when I like to take my time and reveal the destruction of that dignity on camera.  All the bare-assed teeth-clenching humiliation of it.


A Nasty Surprise for Ben

Good spanking or Corporal Punishment videos are about the power play between top and sub.  Believe it or not, the top doesn't always have all the power.  That's because the sub can deliberately avoid giving the top what he wants and so he has to fight for it.  One way to bring out the best in a session is to keep the sub guessing.  That's why sometimes I like to beat Ben's ass while he still has the dignity that his underwear offers.  I know that he knows the worst is yet to come - and what makes it really exciting is ... he doesn't know when.


It's Way Worse Than Prison

If you'd asked me how a str8 kickboxer, recently released from prison, squared up to hard punishment, I would have probably guessed differently to Ash.  The joyous thing about his performance is that it is a fantastic illustration of a guy realizing that he has bitten off way more than he can chew.  His general cockiness is quickly replaced with a general fear and respect for the belt which he says is way worse than anything he suffered at the hands of the guards.  And that ass bouncing is truly a thing of beauty.

Occasionally, I am contacted by someone that says that they have experience of taking a spanking and can take it really hard.  If they have experience with another studio then it's likely their experience of spanking extends to going over the knee and lightly spanked for not completing their homework.  I fantasize about taking their word at face value and tying them down to a bench, prison strapping their bare ass for about an hour.  But back in the real world, I am left with the likes of Tom - a very handsome guy but someone that is not well suited to CP.  It will be fun finding his limits though.  Wipe that smug grin right off.