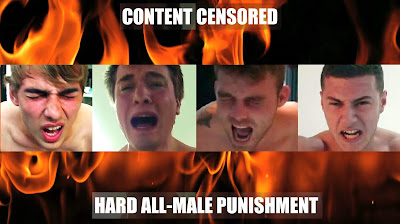 Time For Talk Is Over

It is possible when you get a guy around that is going to be spanked that after their first video, you develop a soft spot for them.  They're nice, you have a laugh and form a bond.  The problem is that they're here to take it hard and so there comes a time when talk must give way to a challenging session.  And even though part of me feels bad, there's a bigger part that enjoys bringing you the hottest videos around.  Like they say ... no pain, no gain.

People often ask me what our hardest video is and invariably I send them to our dungeon series which is so hard that I rarely put details of it on our main site.  It's possible that it's at the outer edges of what I believe is acceptable at No Way Out in terms of 'training'.  It was, after all, a restrained session in a dungeon that lasted several hours.


Car Thief as a Sub

I've had quite a few emails asking about when Ash is coming back and I hope it's soon.  The problem is that after his experience of taking the belt, he is literally scared of it.  It's quite amusing to me that a straight guy that has done time and kick-boxes in his spare time is afraid of my belt, but then again, I don't blame him.  Perhaps the one time he did take it will have to be enough and to be honest, the way his cheeks bounce, I'm pretty sure he made a lot of you very happy.


Car Thief as a Dom

... which brings me onto Ash as a dom and I'm pleased to say that he is interested in coming back and I am in talks with him as to when / where that will happen.  It's almost as if he's desperate to even the score, that he regrets taking it and wants to demonstrate his manliness by beating bare ass.  I'm quite keen to get him to put it to Chris, simply because I do believe he would unleash some kind of hell that could be amazing to witness.  In the meantime, we have his rigorous and first-time session with Ben which I'm sure you agree shows a huge amount of promise.