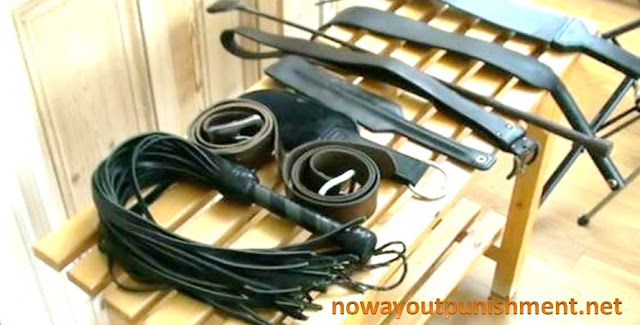 Award for Bravery to Str8 Scott

I was amazed when Scott came back to No Way Out because he really didn't like his first video at all.  He is quite an unassuming type but, as it turns out, very determined.  He came back, knowing that he would be punished harder than last time and the result is a fantastic and teeth-gritting session that really earned my respect.


A Very Tough Challenge For Ben

I thought it would be fun to challenge Ben to see if he could keep count up to 100 without a single mistake.  Of course, he would have to do this while taking very very hard strokes of the belt.  Turns out, he wouldn't make a good accountant.  But that made for a great, exciting video, so I'm happy.


Facing Down the Bath Brush

Richard takes a severe and sustained hand spanking which is unusual for No Way Out where spanking is often just a prelude to real CP implements.  Without bragging, I spanked the ass off him.  Double-handed strokes pounded down on his bare ass until it was red raw.  There's a surprise at the end for him too.  I love surprises, don't you?