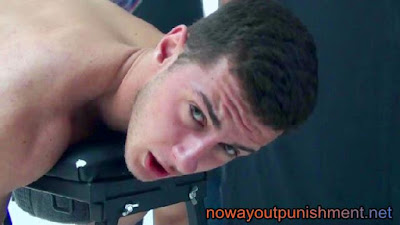 You Can Try Begging

It's difficult to get Ben to beg.  He has an ability to take a lot of corporal punishment and that shows in his films.  But sometimes I like to push him to see whether he will go that extra humiliating distance and beg me to stop, for all of us to enjoy.  The reality is that whether he begs or not, he's gonna get absolutely thrashed.


James Brings the House Down

James is back for a second installment and a much harder punishment.  So many guys I punish try to keep their reactions inside, like they don't want to show them.  But James is different - he screams the place down and it makes for very, very enjoyable viewing.


A Battle of Wills

I like to put my guys in difficult positions, both physically and mentally.  In this video, Ben is trying to withhold the location of my favorite prison strap.  It doesn't seem like he is in a very strong position.  I will spank him until he tells me and then when he does, he's fucked.

This position is a bit controversial.  Some people like it, some hate it.  I like the way it looks and I like the way the guy can't hide from his punishment, his ass presented and there is no way he can try and tuck it under.  The fact that his cheeks are spread makes for tighter skin across the buttocks and a more challenging session as a result.