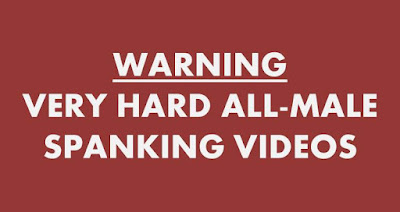 Bubble butt spanked, wheel-barrow style, paddled and then belted and strapped. Hard.  This begins as a more sensual punishment than we usually do at No Way Out, but things soon revert to the norm when he's tied down to the bed and out comes the belts and the prison strap.

This army soldier has been insubordinate to his Sergeant during training and so the Sergeant fully intends to beat some sense and manners into him. He starts with a harsh two-sided paddle on the soldier's restrained ass that just hints at what is to come. The real discipline and attitude adjustment comes when the Sergeant switches to the belt. The soldier reacts very angrily to the humiliating punishment.  The Sergeant doesn't hesitate to switch immediately to a harsh and heavy strap in order to teach the soldier a lesson. This soon has the soldier writhing like a bucking bronco on the frame, begging and cursing in equal measure.  Just to make sure he's learned his lesson, the Sergeant enlists the help of one of the privates to double down on the guy's already battered ass, interleaving strokes and leaving the soldier breathless.